“Sense when has Rue been a nigger,” one enraged tweeter wrote.
“Why is Rue a little black girl? Stick to the book, dude,” another responded to the movie.

The one thing I love about reading a book is having the creative freedom to imagine my characters and fantasy world the way I want them to look.  It’s my prerogative to interpret the writer’s description as tight or loose as I want. Author Suzanne Collins describes District 11’s tribute Rue as having “dark skin and eyes.”  It’s perfectly okay for a person to read “dark skin” and think of a white girl with a deep tan and overly brown eyes.  But to speak out against Hollywood depicting this image as a Black person is outrageously ignorant. 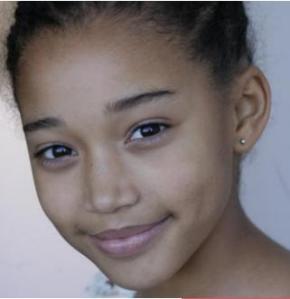 Amanda Stenberg, 13, plays District 11 Tribute Rue in “The Hunger Games.” Stenberg has been criticized by book fans for being black.

It disgust me the most that the “N” word was so effortlessly used.  Collect the top five offensive words, and I have no doubt this one will make a dash to the top.  During the time or slavery and segregation, whites use this word to demean African Americans.  It was their way or telling them they were worthless, a disgrace, inferior, ignorant, vile, underprivileged and undeserving.  Flash forward to today, and this tweeter is telling a captivating 13-year-old Amandla, who is progressing exponentially in their acting career, that despite her talents, she is unworthy of playing in this person’s fantasy land because her ancestry is traced to the “inferior” race.  Preposterous to even fathom! What if this comment was made in reference to this person’s loved one? I wonder if they’d still feel the same way.  Lewd comments like these can not and should not continue to be let go without being unpunished.

“Kk call me racist but when i found out rue was black her death wasn’t as sad #ihatemyself.” 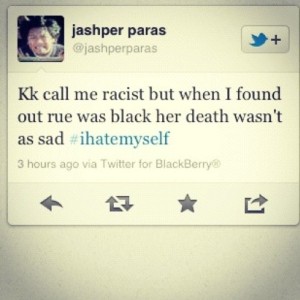 The sad thing about this tweeter is that they knew he was wrong from the beginning.  “Kk call me racist,” simply means he is issuing the disclaimer that he doesn’t care and he feel it’s his right to express his opinion through free speech even though it will be criticized.  This is a reasonable argument.  However, the problem lies deeper.  To be able to think that the fact that Rue was Black makes her death allowable moves it to an express of deep-rooted racism.  Death is the greatest tragedy of life, and the fact that people are numb to because it involves race  is an outcry for social justice reform. I’m sure the author of this tweet does not go around wishing death regularly on Blacks. But they do subconsciously admit that they don’t feel remorse when a Black dies because it’s just not as important as another race’s death. A character they used to hold so dear no longer triggers a response because the race has been revealed.  It is my only hope that by hashtagging ihatemyself, he was unconsciously  seeking help to make a change and be a different person.

“Why does rue have to be black not gonna lie kinda ruined the movie.”

The Tumblr blog Hunger Games Tweets responded, “These people are MAD that the girl that they cried over while reading the book was ‘some black girl’ all along. So now they’re angry. Wasted tears, wasted emotions. . . This is a BIG problem.” It’s the same problem I mentioned before- deep-rooted racism, and in order for us to thrive as a successful society, it has to get solved!

What is the answer? I don’t know, I don’t have it.  I do know that history repeats itself and this incident is a slight indication of our future. We once rejoiced at a black person getting elected as President claiming it a step forward.  Yet, things like this push us two steps backward.  Unless we get together and figure this thing out , the nation we know will slowly revolt back to dark times of fear triggered from racial tensions. No one wants that.

Feel the Hunger of the Games