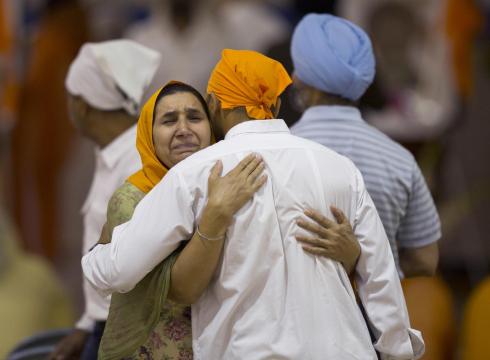 An Army Veteran turned white supremacist entered a Sikh temple in  Wisconsin Aug. 5. and went on a shooting rampage, just 16 days after the  Colorado movie theater massacre. At the hands of gunman Michael Page’s work, six worshipers were left  dead and four wounded. Of those wounded was a police officer. Page,  40, later killed himself after being wounded by another police officer.

The shooting has, again, reunited the issue of gun control. Despite his  criminal record, Page legally bought the 9mm semiautomatic handgun,  bringing to debate whether gun control laws are strict enough. However, another topic surfacing addresses the psyche of the shooter as well as others who have a hatred for Islam. It’s called  Islamophobia and is a form of racism that has been around  since the early 1900s. The term is described as a prejudice, hatred or irrational  fear of Muslims. In the 2000s, there was an emerge of Islamophobics, no doubt from the  attacks of September 11.

A man prays outside the Sikh Temple of Wisconsin in Oak Creek, Wisconsin.

After that tragic day when the world trade centers collapsed, the United States turned on Muslims and Sikhs became hate crime targets. Even thought they are not the same religions, Sikhs are often confused with Muslims because they wear turbans and grow long beards.

It is not surprising to me that people fear Islam. Propaganda on television always show the Islamic nation at war, engaging in suicide bombings. Even our government has told us to question people in the Muslim faith, with the creation of their no fly list that prevents people from boarding planes under the presumption that they look like they could be a terrorist. From the outside looking in, it seems like Muslims are the enemy and are out to destroy us. Consequently, it’s only natural that a person who fought in this war be swayed to believe the same.

I’m not justifying the action, I fully support the troops and believe they are good people for placing their lives in danger for our freedom. Everyone has their own free will to believe what they wish, even when subjected to images that can seem enticing even if their wrong. However, I am saying, giving the current situation, the concept of a veteran islamophobic is not that far fetched.
The question that everyone is asking is how do we stop Islamophobia? I would counter that with the question, how do we stop any types of discrimination or racism? The answer, I believe, is education. The first thing to do is to accept that we can’t blame an entire culture, religion or race for horrors in the world. Unfortunately, bad things happen and they will continue to happen, but you have to leave it at the people who did it and not generalize the act.

Also, we have to truly believe that we all were created equally, and our differences is what makes the world great. Our strengths allow each one of us the flourish and our weaknesses humbles us to work together. As we build each other up, we gain more inner strength.

Prejudice, hatred, and discrimination is wrong no matter what name we give it. It pains me every time I see an article like this, and I can only hope that one day we as a world will wise up and put hate crimes to rest. Until then my heart goes out to those in this tragedy, and I pray the survivors find peace.